Keno might not be the first game which springs to mind when players are thinking of something to play. However, there is often plenty of excitement around this game to make players consider giving it a go. If you haven’t tried keno games yet, you probably have no idea what you’re missing.

Fortunately, our guide to keno is just the ticket for you. In this piece, we will look at keno, where it comes from, how it is played, and how to win. Let us begin, then, with a look at the past. What is keno, and where did it come from? There are a couple keno games available at 21-casino or royal panda casino.

A Bit of Background

Most people will agree that keno originated in Asia. There is a reason to believe that the game first appeared in China, at some time around 200 BC. The game was used as a way of raising funds for warfare by Emperor Cheung Leung. That part of the history of the game is contentious at best. However, the more recent history of the game is a lot clearer.

We know that keno first appeared as a legalised gambling game in the United States. By 1931, people were playing it for real money, and that has been the case since. Bingo is often considered to be the primary challenge to keno. Both are lottery-style games, and both involve checking off numbers which are drawn from a pot. However, the way that keno works is considerably different than bingo. Let’s find out how that is the case.

How to Play Keno Online?

Bingo requires players to cross off numbers on their card to form patterns or lines. Those patterns or lines justify a win. Lottery games need players to match as many numbers as possible on their ticket with those drawn from a pot. Keno is something in-between the two games. For bingo games we recommend sites like Heart-Bingo or Mecca-Bingo.

Players should note that the figures in the example in the above are examples only. The true cash prizes you can win will differ from game to game, as mentioned. The best (and only) way to find out what you can win is by looking at the paytable. This appears beside the game once your bet has been made. 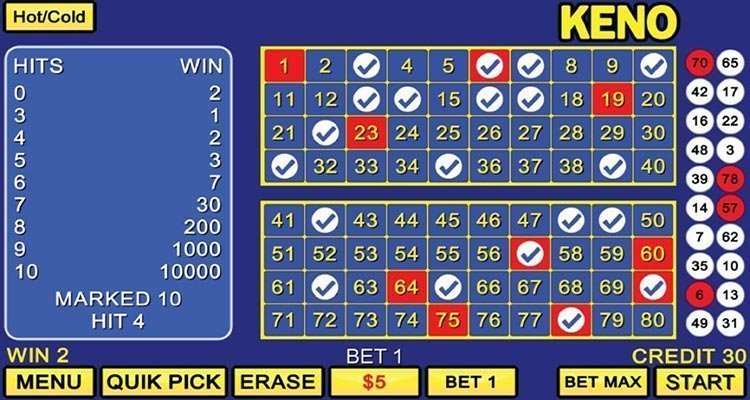 Tips and Tricks for Playing

There is no such thing as a strategy guide for keno. Keno is very much a game of chance. Despite that, there are a few things you can do to bolster your chances of winning when playing keno online. Always check the best casino bonuses before playing. Here are just a few of tips…

Where to Play Keno Online

Keno is a game which can be found in virtually every major online casino if you know where to look. You are unlikely to find under the “table games” tab for starters. Instead, players are advised to search for the game in “other”, “speciality”, or “instant win” game sections at a site. You may also find the game in dedicated “arcade” or “lottery” sections at some sites.

Almost every major online casino site will offer keno games to their players. In most cases, these will not be numerous. Most casinos seldom carry any more than one or two versions of the game. A few software providers have started making live dealer keno games, too. However, these have not taken off quite like other live casino titles.

Again, players should remember that each keno game may be different than others. The number of balls used in a game, as well as the winnings, may change from title to title.