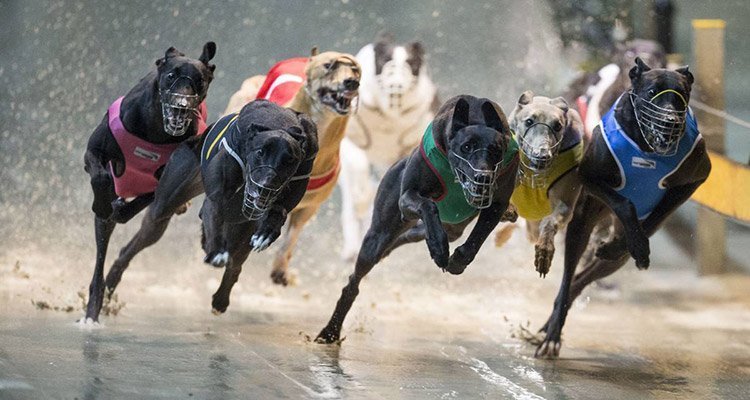 If you’ve spent any sort of time at all betting on horse racing, you will no doubt be aware that greyhound racing is another major sporting event that you can wager money on. Often controversial – far more so than horse racing – greyhound racing isn’t legal everywhere, and there a few things you may wish to know before you slap a bet down on these gorgeous dogs. Before that, though, for those of you who aren’t in the know, we need to look at greyhound racing in general, starting with its origins.

A brief history of greyhound racing

Greyhound racing originally stems from coursing, where dogs chase hares. In 2912, Owen Patrick Smith invented the artificial hare, a mechanical device which runs along a rail around an oval circuit. The principle behind this was to stop the needless killing of hares if the dogs caught them. The system was eventually transported over to Britain in 1926, where it has been in use since. Shortly afterwards, the Greyhound Racing Association was formed to govern greyhound racing in the UK, while the American International Greyhound Racing Association governs the sport stateside.

By the 1940s, around 34 million people watched greyhound racing, before the sport saw a sharp decline in attendances in the 1960s. Since then, television coverage, watered down sports betting taxes and big sponsorship fees have helped to bring the sport back into the mainstream, but it still nowhere near as popular as it once was.

Modern day greyhound racing faces a lot of obstacles. There are animal rights activists who want the sport banned. To counter them, new racing codes have been developed. And new rules to ensure that all the dogs are treated well, and that professional kennels and trainers are involved in the sport. Modern greyhounds are given excellent medical care and are tested to make sure that they are not doped (a practice common in the early part of the Twenty-First Century) or mistreated. There are also adoption groups in place to ensure that dogs which have come to an end of their “racing days” are housed and cared for.

This is a far trickier subject to broach. In some countries, yes, greyhound racing is legal and very well regulated. In other countries, it is illegal and outlawed. Then you also have countries where it is neither legal or illegal, and they tend to have rather poor conditions for the dogs which is an ongoing concern.

Australia, Ireland, South Africa, and the United Kingdom all permit greyhound racing, albeit under strict conditions and regulation. The United States – like so many other gambling aspects – allows each state to decide for itself. Around 40 or so states have banned greyhound racing, but in the states where it is legal, each track and state has its own rules and laws governing what is and is not allowed. The rules are strict and the punishments severe for any owner who doesn’t abide by them.

Greyhound racing is one of several different types of races you can bet on, alongside horse racing, motorsports and athletics. Unlike those other sports, though, there are no humans engaged in any part of the race, so you are often betting solely on the skills of the dog.

At the end of the day, though, betting on greyhound racing isn’t really any different than betting on those other racing sports we’ve already mentioned. Most bets involve choosing a winner. Although we’ll cover the various types of bets you have open to you in just a moment. If you like to play other games, like slots, roulette or scratch cards, then play at 21 Casino.

If you have decided that greyhound racing is your cup of tea, where can you bet? Most tracks have a bookie which will take bets. In Europe, most major online sportsbooks will also take bets on greyhound racing. High-street bookies also get involved in the action, too. It is not impossible to find specialist greyhound betting sites, either. They only focus on greyhounds, so the races and the list of bets you have open to you are vast.

Of course, no online bookie can ever replicate the feeling of being trackside yourself. However, with the number of tracks in decline across the world, online betting on greyhounds is a far simpler path to take.

You have several types of greyhound racing bets open to you. Place bets allow you to bet on a dog finishing in first or second place. Show bets consist of betting on a dog to finish first, second or third. A Win-Place bet involves betting both on win bets and place bets in one. You can also wager Win, Place and Show bets in one ticket. These result in higher payouts if your dogs come home in the order you selected.

Exacta bets, Quinella and Exacta Box bets can also be placed, and these are no different than the types of bets you would expect to find in horse racing. Trifecta, Superfecta, Daily Double, and Pick 3 bets can also be wagered. A full list of the types of bets you can make (as well as a guide to how each of them works) will be available trackside or at any major online bookie.

If you are going to bet on greyhound racing, there are a few things you may wish to keep an eye out for. Firstly, check for wet weather. These conditions often favour wide runners, and dogs on the inside may find it more challenging. It sometimes helps to bet on a pup, rather than a veteran. Dogs with under 20 runs tend to improve over time, but more established racers may tend to “sit back” later in the race. It also helps you pay attention to the dogs’ trainers. Trainers with a great track record can often produce winning dogs time and time again. A happy dog is likely to bring you results more than an unhappy one.

Of course, we could go on all day about greyhound racing tips. However, unlike horse racing, there is often more “randomness” about the sport, so tips may not necessarily equate to wins in greyhound racing.